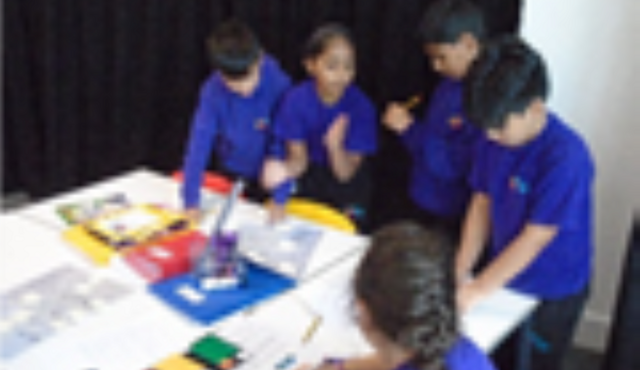 Year Three
This term has been jammed packed with activities for Year 3.

In Science this term, we have been focusing on the Skeleton and muscles in the human body as well as classifying animals into Vertebrates and Invertebrates. The children enjoyed creating their own skeletons with salt dough and labelling the different bones. They created their own forearm with elastics that represented the biceps and triceps and the contraction and relaxation of the muscles. In the last week, the children completed an investigation where they hypothesized what would happen without bones in our bodies.

This term in Maths, the children have been looking at money and measurements. They learnt how to add and subtract with money as well as convert pence into pounds. During our measurement topic, they learnt how to measure in centimetres, millimetres and metes using a range of equipment like trundle wheels, metre sticks, tape measures and rulers. The children then went on to learn how to convert millimetres to centimetres and centimetres to metres. Finally, the children learnt about the perimeter of a 2D shape and how to calculate it.

In History, the children explored life in the Stone, Bronze and Iron Ages. They looked at many different aspects of each period of time including their clothing, housing, diets and tools and weapons. Using this knowledge, they were then able to answer our Big Question for the term which was: Would you prefer to live in the Stone, Bronze or Iron Age? The children were also lucky enough to have an archaeologist come in for the day to teach them how to be archaeologists themselves. The day focused on broadening children's knowledge of the skills needed to be archaeologists as well as deepening their understanding of prehistory. They looked at digging in a pit, washing their finds, understanding stratigraphy, aerial photography, recording small finds and dissecting coprolites. The children also enjoyed a whole Stone Age day where they got to build their own version of Stonehenge, they learnt interesting information about the Stone, Bronze and Iron Ages and finally, ended the day with a battle between the Romans and the Iron Age Celts and a variety of warrior training games.

At the start of term in Art, the children looked at drawings of animals to help them create their very own drawings for our Art Exhibition. Later on in the term, the children used our topic of Prehistory to create their very own cave art. They explored cave art in the Lascaux Caves, first copying a section of it themselves on crinkled brown paper, then using their knowledge of cave art to make their very own prehistoric artwork on rocks
We hope that everyone has a restful holiday and we look forward to seeing you all next term.

It is here! The end of the Spring term, and what fantastic experiences the children have had! When we started, after the Christmas holidays, the children hit the ground running learning all about the Ancient Egyptians. They wrote excellent stories in English, which they then converted into graphic novels. In Maths, they learnt many different ways to multiply numbers and how to work out the area of rectilinear shapes. The children had great fun building their own pyramids out of clay and finished them off with gold paint.

The children then went to Ufton Park to help their understanding of and role-played a court room. The children are looking forward to the residential in July!
Also, this term the children have taken part in various Discovery Days, where they have explored around a particular theme. In January, they worked around equality and diversity, in February the children spent a whole day creating mosaics in an Art day. In March, the children had World Book day and we based our work around the story ‘A boy named Wonder’. More recently, the children explored the local grounds of the school and created their own maps in a Geography discovery day.

The children have worked extremely hard over the last few months and it has been great to see all of them flourish. All year 4 staff would like to say a big thank you to all families for your support this term. We hope you all enjoy the holidays.